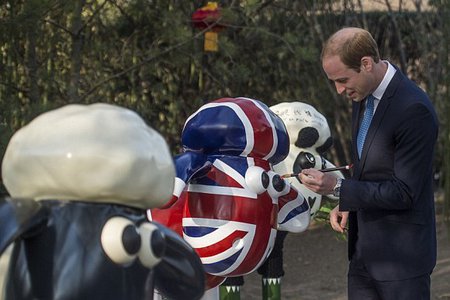 Bristol Children’s Hospital has a long history of Royal support and The Grand Appeal’s cracking fundraising efforts have been celebrated with a number of royal visits.

Find out about The Grand Appeal’s history

Bristol Children’s Hospital was established in a building on St Michael’s Hill in 1866, opening additional space in 1885. By 1897 it had gained “Royal” status through the consent of Queen Victoria.

In 1910 King George V and Queen Mary consent to become the very first Royal Patrons of Bristol Children’s Hospital which is afterwards known as ‘The Bristol Royal Hospital for Sick Children and Women.’

During the Second World War, the Hospital is visited by its Royal Patron Queen Mary, wife of King George V, who meets the patients and staff. The Hospital windows are blacked out to hide the light from the windows and protect it from being a target for enemy air raids but in December 1940 it is finally hit by a bomb – thankfully all children and staff were safely evacuated with no casualties.

In October 1966, the Queen Mother visits Bristol Children’s Hospital to celebrate its 100th anniversary. As part of the festivities she opens a new building housing Out-patients, Casualty, X-ray, and Pathology departments – the first major extension of the Hospital for 80 years which was much delayed due to the Second World War, when the Hospital was badly damaged during an air raid.

In February 1983, Diana, Princess of Wales, opens a new Intensive Care Unit at Bristol Children’s Hospital. Over 2,000 people gather outside the Hospital to see the Princess, and inside she meets patients, staff, children from local schools who have fundraised for the hospital. Diana also receives a teddy bear for the royal nursery and a cot mobile of coloured shapes made by 6-year-old patient Katie Harris.

On the 16th March 1988, the Duchess of Kent opens a new Bone Marrow Transplant Unit at Bristol Children’s Hospital, one of the first in the country. The Unit featured four high-dependency isolation cubicles equipped with specialist air filters and televisions to keep children entertained.

After the visit, the Palace said…’Her Royal Highness was especially pleased to have partaken in the official opening of the new Bone Marrow Transplant Unit and to have seen for herself the happy atmosphere created between the children and the hospital staff in the new wing.’

In 1999, the Prince of Wales visits Bristol to view the plans for the new Bristol Children’s Hospital on Upper Maudlin Street and endorses The Grand Appeal by inviting donors, guests and staff to visit Highgrove for a special reception, including a tour of the gardens.

The Prince of Wales performs the opening ceremony for the new state-of-the-art Bristol Children’s Hospital on Upper Maudlin Street and meets patients in the Cardiac Unit, Surgical Unit and the Play Centre. The building is the very first purpose-built children’s hospital in the UK, with The Grand Appeal funding £12 million towards it.

The Princess Royal, seen here in the Paediatric Intensive Care Unit, visits the Hospital to open a dedicated paediatric MRI scanner funded by The Grand Appeal at a cost of £1.3 million: the first of its kind in the country.

She also opens Cots for Tots House, a 12 bedroom house funded by the Appeal providing free family accommodation for parents of critically ill and premature babies in the Intensive Care Unit, allowing them to be just minutes away from their child.

Prince William tries his hand at a spot of Shaun painting!