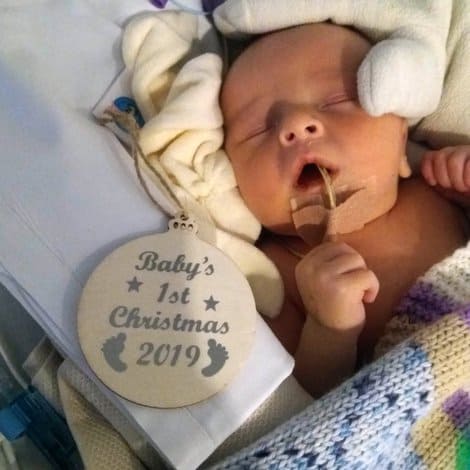 Now more than ever, children like Ronnie-James need your help.

In the lead up to last Christmas, Emma was wondering if her second child would be born on Christmas Day; Ronnie-James was due to come into the world on 27 December 2019.

“We knew Christmas was going to be disrupted, that close to our due date it was inevitable – we just didn’t know quite how different it would be.

In early December 2019, I went for my last growth scan; I had a textbook pregnancy and no cause for concern until I saw the look on the sonographer’s face that day.

Ronnie-James had a diaphragmatic hernia. There was a hole in his diaphragm which was allowing his stomach to move into his chest, squashing a lung and moving his heart. Ronnie-James would need to be born at St Michael’s Hospital in Bristol and would go straight to the neonatal intensive care unit (NICU) until he was strong enough to withstand an operation.

I was booked in for an induction just two weeks later. Looking back now, having such a short window from finding out to having him was possibly a blessing. I never had time to get my head around what was happening.

On 19 December, Ronnie-James was born. They had to paralyse him as he was being delivered and he was immediately whisked off to NICU and put on an oscillator, to help him breathe. An hour and a half later, I was wheelchaired up to see him.

Nothing prepares you for that sight, all the tubes and machines for your baby that’s only hours old.

“We had no idea how long he would need to be there; it could be days, weeks, or months until he was strong enough for the hernia to be surgically repaired. It was six days before Christmas. We were far from home and we did not know when we could return.

“Cots for Tots House was a lifeline. The same day I gave birth, we were able to move into a family room so that our son, Jayden, could also be with us.

At just four days old, Ronnie-James was strong enough to come off the oscillator and have his operation. He was lucky. There was enough tissue to stitch up the hernia without the need for a patch which could have led to further complications.

We were then given the greatest gift; on Christmas Day he was taken off his breathing tube and we heard him cry for the very first time.

Having the opportunity to stay at Cots for Tots House, just across the road from Ronnie-James, for those frightening few weeks gave us more comfort than I thought possible at the time. You never felt alone, everyone there had poorly babies too – we had an unexpected support network, especially in Anne, the house manager.

Unfortunately, our hospital journey is far from over. After we got home on 5 January 2020 Ronnie-James was diagnosed with a rare brain condition called Dandy-Walker Syndrome. Our trips to Bristol Children’s Hospital continue.

The care both St Michael’s and Bristol Children’s Hospital have given us and the compassion and support we received from The Grand Appeal is immeasurable.

So, I ask you if you have anything to spare, however small or large, please donate today to help sick babies and children in hospital get the care they deserve and families the support they need.

Our Christmas was turned upside down last year and although this year will be more settled for us, sadly, there will be other families who unexpectedly find themselves miles from home with a critically ill child to support this Christmas.

Thank you for helping to make a difference.”

Meet more of our young patients