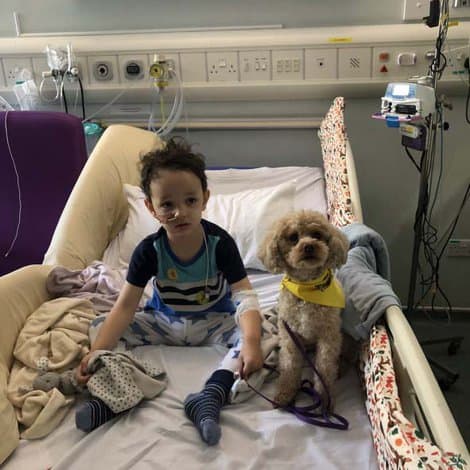 In a blink of an eye, happy and healthy three-year-old Regan fell dangerously ill with pneumonia. Rushed to intensive care at Bristol Children’s Hospital, staff battled around the clock to save him.

We asked Regan’s mum to reflect on her terrifying experience and why coronavirus still poses a threat to brave little Regan.

“Whilst lockdown has lifted slightly for most people, for families of a high-risk child like ours, the worry isn’t over. We’re still in strict isolation, trying to do everything to protect our little Regan. It was only last year that he was on a ventilator. Yet seeing footage of patients, covered in wires and tubes, fighting coronavirus on the news makes it feel as though it was just yesterday.

Thursday 28 March 2019 is a day I’ll never forget. I’d left my three-year-old son Regan with my partner as he snoozed on the couch. That morning, he’d woken up with a sniffy nose and a slight cough. After returning from my daughter’s swimming lesson, it was clear Regan had deteriorated.

He was pale and his breathing shallow. We rang 111 for some advice and a doctor was sent. The doctor examined him. Initially, he said it was nothing more than a cold. However, when he checked Regan’s oxygen levels, everything changed. They were drastically low. Within minutes, an ambulance had been called and our lives were about to be turned upside down.

My daughter was in fits of panic. I frantically tried to pack an emergency bag whilst my partner jumped in the ambulance with Regan. Everything was a whirlwind. I didn’t know which way to turn.

Regan was rushed straight into resuscitation at our local hospital. Surrounded by a swarm of doctors and nurses who were trying every tactic to increase his oxygen levels, Regan was fighting as hard as he could. Despite everyone’s best efforts, Regan went downhill rapidly. He would need to be put on life support.

They wheeled Regan into theatre ready to be sedated. Whilst hospital staff called out for this and that, my poor boy was wide awake, with no idea what was happening. His little body had been drained of all its strength; he couldn’t even shed a tear. I held him as he drifted off to sleep, not knowing when I would see him awake again.

My partner and I were left waiting in the corridor. We felt helpless, crumpled on the floor as we cried. I needed to be with my boy. His surgery was only supposed to take 30 minutes, but as the clock counted down, we were left wondering what was taking so long. There had been complications, they eventually said.

The Wales and West Acute Transport for Children Service (WATCh) team quickly assembled. This special bunch of experts would transfer Regan safely to Bristol Children’s Hospital for the specialist treatment he desperately needed. We had a few minutes to say our goodbyes before they whisked him away.

Seeing him for the first time in intensive care in Bristol was almost indescribable. I just couldn’t believe all of this had happened. They told us Regan was fighting pneumonia in both of his lungs and part of one lung had collapsed whilst his body wasn’t responding to life support.

I cried for days and days. I couldn’t bear the thought of him being alone. Thankfully, we were given accommodation by the hospital’s dedicated charity, The Grand Appeal. It was an instant relief. Sleeping in a bed, rather than a hospital chair, was the self-care I needed to recharge and be there for Regan.

As time went on, we saw fellow patients and their families discharged. It was upsetting. I wanted it to be us, but Regan was in no position to leave. The team attempted to wean him of life support three times with no success. Staff gently prepared us for the worse. It was heart-wrenching to think we could lose him – words cannot describe that feeling.

Days and nights merged into one another as we waited patiently for a glimmer of hope, but unfortunately, we were given the news that Regan’s body had started to attack his healthy organs. He couldn’t talk, he wouldn’t be able to walk and he could lose his eyesight. Upon hearing those words, our world came crashing down once more. Yet however bleak things looked, the staff at Bristol Children’s Hospital continued to work around the clock. They never gave up on Regan. After the longest week of our lives, Regan was moved from intensive care to Caterpillar Ward.

It wasn’t until seven weeks later that we were finally told the magic words ‘you can go home’. As excited as I was, it was a daunting prospect. Regan still had a long road ahead of him. His speech and language, his short-term memory and academic progress had all been affected but at least, we could tackle these hurdles together as a family.

Fast forward to 2020 and it’s not only the effects of Regan’s illness that we have to deal with. Coronavirus has brought with it a whole set of new challenges. Like many across the country, we have struggled with isolation, but having a child with a weak immune system has only heightened our stress and anxiety. I find myself questioning everything, thinking ‘is it safe?’ Despite it all, we count our lucky stars every day that our little Regan is alive and with us.

Bristol Children’s Hospital holds a very special place in our hearts. I can’t bear to think where we would be without them. Everyone – from the surgeons to the dinner ladies and cleaners – were incredible and I know for certain how hard they will all be working throughout this pandemic.

In September 2019, we challenged ourselves to climb Snowdonia to show our appreciation of the healthcare heroes who saved Regan’s life. None of us had ever done anything like it, but we were determined to help other children in need. As a result, we raised over £2,000. It felt like one of the biggest accomplishments of my life! Being able to help The Grand Appeal when most charities are struggling gave me an even greater sense of satisfaction.

I would urge anyone who is thinking of donating or fundraising for Bristol Children’s Hospital to do it. Our situation could so easily have happened to anyone and together we can make sure no family feels alone as they face the unimaginable.”

Help other children in need