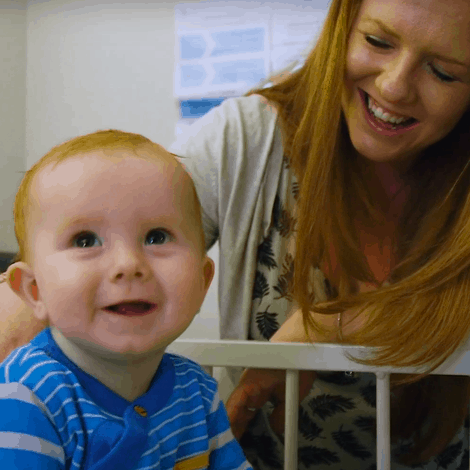 Despite restrictions being eased, the families we support are still at risk. Families like Noah’s. He was diagnosed with a kidney condition and, along with mum, Beccy, travels to Bristol Children’s Hospital every week for life-saving dialysis.

“Life in lockdown was little different from the one we live every day. I am in constant fear my two-year-old son Noah will catch something. We avoid crowded spaces and rarely take him to soft play areas. Whilst everyone is enjoying their newfound freedom, Noah will most likely have to live with these worries for the rest of his life.

11 weeks after I gave birth to Noah, we travelled to North Wales to introduce Noah to his grandparents. It was a blissful weekend. But as we made our way home, our world shattered.

Noah was diagnosed with something called Primary Hyperoxaluria Type 1. It’s a rare disorder that mainly affects his kidneys and it’s literally turned our lives upside down. ‘I don’t care what I have, as long as they’re healthy’ is a phrase used by many expectant mothers, including myself. But what if the baby isn’t healthy? Noah’s illness was a complete shock. There were no signs during my pregnancy.

In the beginning, it was terrifying, and sometimes it still is. I’ll never forget the sadness that consumed me when they told us the news. Garth and I felt so helpless. But it’s thanks to Bristol Children’s Hospital that we can see the light now. They have helped us adjust to this way of life, teaching us to be strong, and they are right by our side as we deal with everything this illness throws at us.

Six days a week, Noah and I will travel to Bristol Children’s Hospital for his dialysis. It feels like we spend more time there than we do in our home. So much so that Noah is known throughout the hospital. His dialysis usually takes around four hours. I’m sure any parent can appreciate how hard it can be to entertain a child, let alone one attached to a machine and confined to a cot.

Noah’s dialysis has taken over our lives, but it’s the only thing keeping him alive and healthy. When Noah was diagnosed, we were told that without treatment he would not survive past the age of five. That thought is never far from my mind.

At just 10 months old, Noah had a liver transplant in Birmingham. We spent a month there and every single day, we’d receive a call from our Lighthouse Ward family asking us how we were all doing. When we were transferred back to Bristol via an ambulance, the staff were there waiting to greet us, and they’d even filled Noah’s room with balloons. It was clear they’d missed us and we certainly had them. Noah is now waiting for a kidney transplant and it means his daily dialysis will continue for the foreseeable. Some days are tough, but staff are always on hand to help us get through it.

Throughout coronavirus, Noah and I still make our way to the children’s hospital, but it comes at a risk. Noah takes immunosuppressants to make sure his body doesn’t reject his liver, but it leaves him open to infection. Everyone is worried that they might catch coronavirus but imagine fearing that as well as a common cold. Any bug or infection is dangerous for Noah.

Reducing his dialysis during the pandemic has also posed its own problems. Noah has never had so little dialysis and his blood results have had to be monitored extra closely to make sure he is stable. Too little dialysis could lead to harmful levels of toxins in his body and potentially a heart attack. Doing what’s best for Noah feels like a constant battle.

I know we’re in safe hands, though. Bristol Children’s Hospital has been nothing short of amazing throughout Noah’s life. From the reception staff who greet him every morning to the porters who swing by his hospital room to say hello, or the entire Play Department who we rely so much on and, of course, the doctors and nurses who help Noah survive every day.

Lockdown has given people insight into how families like ours have to live every day. At times it’s terrifying, but I will do everything in my power to keep Noah safe and give him the very best chance at life.”

Help children like Noah to not only survive but thrive