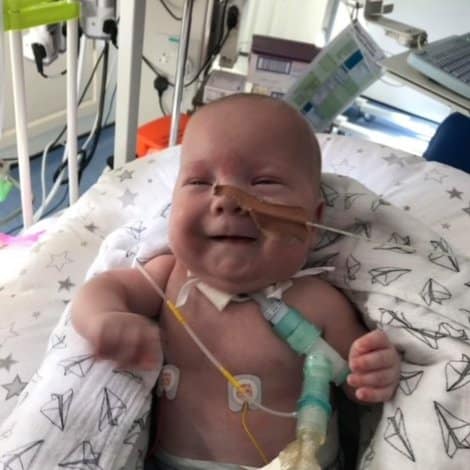 2020 has been a year full of fear and isolation. For some, those feelings will bring back difficult memories.

Back in 2018, Paige stayed with us for six months while her son Marleigh fought to grow strong. Marleigh even spent his first Christmas in St Michael’s Neonatal Intensive Care Unit.

We spoke to Paige as she reflects on Marleigh’s rollercoaster journey.

“In March this year, all our lives changed, almost overnight, as the pandemic swept through the nation. While it’s been challenging, nothing will compare to how my life was turned upside down in March 2018 and how the rest of that year played out for me, and my son, Marleigh.

When I was 24-weeks pregnant with Marleigh, I was diagnosed with pre-eclampsia and admitted to Truro hospital. Over the following few weeks, I became very ill and at 27-weeks I was rushed to Derriford Hospital so that Marleigh could be delivered.

Marleigh was born on 11 March 2018, it was Mother’s Day. He weighed just 815 grams. That is the equivalent of two cans of soup. The situation was not good, and he wasn’t expected to survive as he was so tiny they struggled to intubate him.

He was taken to theatre to be intubated while I remained in intensive care – I was still very sick myself. While he was in theatre, Marleigh became freezing so I was brought to see him to say my goodbyes.

Unbelievably, Marleigh wanted to fight, and fight he did. Despite holes in his heart and a diagnosis of Pierre Robin Sequence, Marleigh took every day in his stride and over the next 11 weeks grew in strength and size and was doing well. He was then well enough to be transferred back to our local hospital in Truro.

Unfortunately, after two weeks in Truro, Marleigh became very poorly again. He was diagnosed with pulmonary hypertension – his blood vessels were not opening properly, so the blood was not getting into his lungs to pick up oxygen. He was transferred to St Michael’s Hospital in Bristol.

When I arrived in Bristol, I did not know how long we would be there for. Marleigh’s future was so uncertain – I had no idea what the journey in front of us would look like.

The day we arrived I was offered a room in The Grand Appeal’s Cots for Tots House, directly outside St Michael’s. I cannot express what a comfort that was. It was such a supportive environment, and I just knew instantly we were in the best place for Marleigh.

I met many parents in my time at Cots for Tots House in similar situations, most of which became friends and I have stayed in contact with ever since. You are all there together, trying your best to navigate the heart-breaking situation of having your newborn in intensive care, fighting for their little life.

Following a cardiac review, Marleigh started on his surgical journey. The first was hernia surgery. That operation was hard on him and that day he was resuscitated in front of me. It was in that moment, it suddenly hit me, just how bad things were.

It had previously been mentioned that Marleigh may need to have a tracheostomy when a tube is fitted into the windpipe to help him breathe. I knew it was time for him to take that step so that he could get better. So, in July 2018, Marleigh had surgery to fit the tracheostomy that he still has to this day.

He went on to have two cardiac catheter surgeries to help further understand and treat his heart conditions and then had a PEG fitted, which is a small feeding tube.

“Following his surgeries, we continued to stay in St Michael’s and Cots for Tots House for several months, so that Marleigh could be closely monitored.

“Then, after I had bought and wrapped all the presents and prepared for Christmas in hospital, one week before the big day, Marleigh was able to return home on a ventilator. We had to spend a couple of says back in Truro Hospital to make sure everything was prepared, and we had all the supplies and medicines he would need, but we would be going home.

“It is hard to believe that was almost two years ago. Our trips to Bristol have continued, Marleigh’s doing well, but as he still has his tracheostomy and PEG, we return regularly for check-ups. We are hopeful it will be possible to remove the tracheostomy early in the New Year.

“When you find out you’re pregnant, you think about the baby you will safely deliver. You never think it will be you that will end up having so many complications, that it will be you and your baby that depends on the incredible care and support of St Michael’s, Bristol Children’s Hospital, and The Grand Appeal.

I never thought it would be me, but now here I am telling my story knowing only too well how challenging times can be and how endlessly grateful I will always be for the support, care and treatment we received.

If you can spare a little this Christmas, no matter how big or small, please do consider supporting The Grand Appeal. Please help make sure that other babies like Marleigh, and parents like me, continue to get the support they need during the most difficult time of their lives. Thank you.”