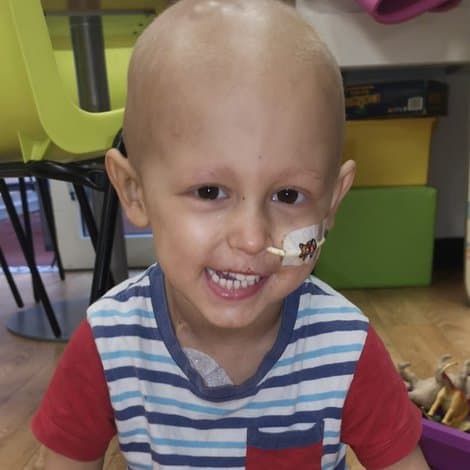 Families from across the country come to stay in our family accommodation while their child is in hospital. Some will be with us for days or weeks. Some can even stay for months.

Alex has stayed at Paul’s House ever since his son Lewis was given a devastating diagnosis in June.

Alex tells us, in his own words, how it’s felt to watch his son battle cancer while being far from home and loved ones with Christmas approaching.

“It has been a surreal year, no-one could have foreseen what 2020 would bring, for any of us, let alone my three-year-old son, Lewis.

Like many families across the country, in June we were at home making the most of endless summer days, however best we could. My partner was furloughed, and I had taken a week off work; we were supposed to be in Portugal getting married – but Coronavirus had postponed those plans.

Instead, we were just making the most of some quality time together – the paddling pool had been out all week, and I had been converting our campervan with Lewis’ enthusiastic help.

On the Sunday before I returned to work, Lewis woke up saying he wanted to be sick, but he was not and continued to demolish a huge breakfast. A typical toddler moment, we thought.

The following day, I went back to work and finished slightly early. Before I left, I called my partner to check if we needed anything from the shop. She told me she was at the doctors – Lewis had been sat on her lap, watching TV when he turned to her and said ‘Mummy, I’m so tired,’ and with that, his eyes rolled, he went pale and purple and momentarily collapsed in her arms. Within a matter of seconds, he came back around and was his usual self. So rather than call for an ambulance, she called the GP and made an urgent appointment.

‘Have you considered a brain tumour?’ were the words that came out of the GP’s mouth. Of course, we had not. Why would we have? We were told to go straight to Torbay Hospital for a scan. I met them at the hospital. Only one parent could accompany Lewis because of Coronavirus restrictions.

I remember a flurry of doctors being called in to look at his CT scan. They said my partner should come back in too. From when she arrived, it felt like we were in a movie – it was so far from reality. We were sat down, and the words that followed shook us to the bone. ‘There is no easy way to say this, your son has a brain tumour.’

We were then blue lighted to Bristol Children’s Hospital. It was now 9 pm. In five short hours, I had finished work, been given the most devastating news of my life and was now in an ambulance travelling hundreds of miles to a city I didn’t know.

When we arrived at the Emergency Department that night, Lewis had another CT scan to confirm the diagnosis and we were moved to Daisy Ward, the high dependency unit. His condition deteriorated quickly, as there was a liquid building on his brain that was interfering with communication between his nerves. The next day he had surgery to drain the liquid and take a biopsy.

Lewis was diagnosed with Grade 4 medulloblastoma – an aggressive cancerous tumour in the cerebellum, the bottom back part of the brain that affects motor function.

On Friday 12 June at 10 am Lewis was taken back into theatre to have the tumour removed. Putting him to sleep that day was the hardest moment of my life. It was an 18-hour procedure. I can never put into words how difficult that day was, but I will also never forget Lewis’ neurosurgeon, Dr Edwards. There has an aura of tranquillity about him when he spoke, which gave us strength because we knew our little boy was in good hands.

The surgery was a success, the tumour successfully removed. However, the cancer cells had spread around Lewis’ spine and his back and he was diagnosed with Posterior Syndrome, which meant he lost the ability to speak. He could not swallow, nor could he barely move.

In just one short week, our entire world had fallen apart in front of us. We were in a strange city; we did not know. In between being at Lewis’ bedside, we were moving our car around various car parks to keep the costs low, moving between hotels, as so many were closed due to the pandemic. We had no choice but to live out of one suitcase, with no access to any laundry facilities. We were completely overwhelmed and hardly had the strength to even comfort each other.

Then, we were told about the hospital’s charity, The Grand Appeal. A room had become available in one of their family accommodation buildings, Paul’s House. To be honest, I was in shock – how is it even possible that we could be given our own place to stay, with nothing to pay for however long we need it – just across the road from the hospital and our son’s bed?

Moving into Paul’s House was a saving grace. The charity’s support knows no bounds, and I truly do not know how we would have managed without their help over these last six months.

A couple of weeks after Lewis’ surgery, he was strong enough to start chemotherapy. Despite some setbacks and how aggressive the cancer proved to be, Lewis persevered. I will never be able to fathom how children can show such resilience.

Several cycles of chemotherapy followed by high dose chemotherapy have got us to where we are now. While the cancer does not appear to be reducing yet, it is no longer growing. Although our situation could be better, it could also be a lot worse. Lewis is back to being his normal cheeky, three-year-old self again. He is sitting and starting to crawl and is building his lower abdominal strength.

Lewis’ rehabilitation will take time, but my partner and I are determined to give him the round-a-clock encouragement and support he needs to help him on this journey.

While our hospital days are not over, it looks like we might get home just in time for Christmas, where we will continue to administer his medication and continue his rehabilitation plan.

As we walk out of the hospital doors and leave our room at Paul’s House behind, our thoughts will be with the hundreds of sick children and families who will not be driving home for Christmas.

Instead, they will stay within these four incredible walls, with the insanely talented doctors, nurses and support staff that have helped save my little boy’s life and will continue to care for him as long as we fight this hand we’ve been dealt.

I remember how it felt to be almost bombarded with charity requests – the stories they share seem a million miles away from your life; it is almost impossible to think of that as a reality. Well, I can tell you it is a hard reality for us. I will devote hours and days to help spread the word and raise money for The Grand Appeal. What they and Bristol Children’s Hospital have done for us these last few months, has made an unfathomable difference, and helped us to navigate the most difficult year of our lives.

So, if you can support with a donation, no matter how big or small, please do, and help the many families like mine navigate the terrible journey of having a sick child and support the outstanding work of Bristol Children’s Hospital.”