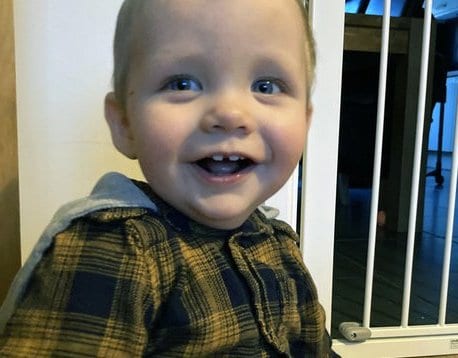 When Vicky and Rob were given the news their 12-month-old son Grayson had a rare bleeding disorder called Haemophilia, they were shocked.

Vicky and Rob had never even heard of the word ‘Haemophilia’, let alone know that the genetic condition ran in their family. We talked to Vicky about Grayson’s hospital journey and how Ocean Unit has helped her every step of the way.

“Grayson is our firstborn. As soon as I saw his cheeky face, I was overwhelmed with love. This little boy was all mine.

We’d been enjoying our first few months with Grayson (along with a few sleepless nights, of course) when we noticed Grayson wasn’t feeling himself. His temperature was very high. We anxiously waited at our local Emergency Department, where Grayson underwent several tests and had his blood taken.

’Grayson is anaemic’, they said. Hopefully, after a blood transfusion, he would be back to his normal lively self. Only, that wasn’t the end of our story.

Then came the news Grayson was suffering from Haemophilia B. It was a total shock. How had we not known?

Haemophilia B is a blood condition inherited through family members. Yet, to our knowledge, Grayson was the first Haemophiliac in our family. As a mum, I wanted to protect Grayson. It hurt to know I couldn’t help him.

In our blood, we have something called ‘factor IX’. It’s this Grayson is lacking in. Our bodies use this factor to seal wound to stop bleeding and promote healing. Without it, Grayson could bleed for longer than usual.

What would this mean for Grayson? Bumps and scrapes were bound to happen.

Rob and I noticed how easily Grayson would bruise. He’d even bruise when we picked him up or when we held his arms to help him balance. Was he bleeding internally? We rushed to Bristol Children’s Hospital, where doctors told us Grayson’s condition meant he could bruise spontaneously. I was relieved to know it was nothing more serious, but I knew we’d have to keep a close eye on Grayson.

We began to visit Ocean Unit at Bristol Children’s Hospital so Grayson could receive the factor his blood needs via an injection. Unfortunately, despite several attempts, the nurses couldn’t find a vein in Grayson’s little limbs to administer the injection. Having a port fitted was our only option.

A port is a special intravenous line placed completely inside the body. Grayson would need surgery to have it fitted.

It was a nerve-wracking thought.

Staff allowed me to be with Grayson until he was anaesthetised. Leaving him there felt as though I’d left a little piece of me behind. I went to the shops to distract myself.

Thankfully, the operation was a success, and our brave boy has been happy and healthy since. Of course, Grayson will need to be given his treatment once a week for life, but we hope in time we will be able to do this from home.

The most important thing is that Grayson can lead a normal life. He might not be signing up to the local rugby team, but he’ll enjoy life to the fullest.

Bristol Children’s Hospital has been a huge part of Grayson’s journey. If I could choose one word to sum up the team, it would be ‘amazing’. Ocean Unit has not only helped Grayson, but us too. They’ve taken the time to help us understand what our son needs and how we can help him thrive in life.”

Grayson is just one of 400 children cared for by Ocean Unit at Bristol Children’s Hospital. With your help we can ensure every one of them receives the very best care.