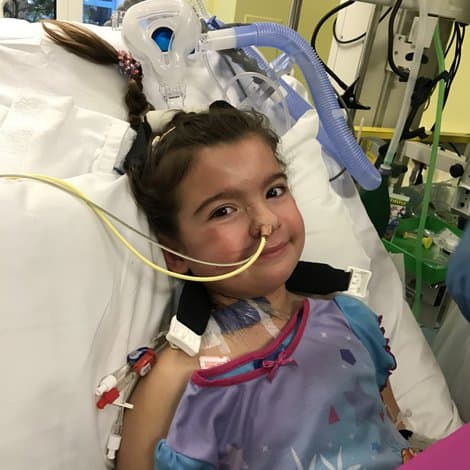 Fliss’ daughter Georgie went from being a happy and healthy seven-year-old girl to needing life support in a matter of hours.

Fliss tells us how a team of extraordinary staff at Bristol Children’s Hospital rallied around her daughter as she fought for her life and why she will be forever grateful for their help.

“When my seven-year-old daughter Georgie complained of feeling unwell, I would never have imagined what would happen next.

I took Georgie to the doctor’s surgery. Carrying her in my arms, I saw the exhaustion on her face. It made me think something was very wrong. I felt a tightness draw in my stomach, like a knot being pulled steadily. Our GP wasn’t sure and told us she needed to be in hospital.

At first, it was a relief to be in an ambulance with Georgie, but then Georgie deteriorated. She needed oxygen, but refused to wear a mask. I tried to persuade her to have the oxygen clips instead of a mask. Anything to keep her oxygen flowing.

I talked to Georgie to keep her conscious; to remind her that her mummy was by her side. As the ambulance twist and turned, all I could do was stare out of the window trying desperately to work out where we were. How long would it take to get to Bristol Children’s Hospital?

In Bristol, we were met by a nurse who told us there was a bed waiting. They had been expecting us. My husband arrived and held Georgie up as we tried to collect a urine sample. Georgie managed it, but as I handed the sample over, she had a seizure in my husband’s arms. I called for help. Suddenly we were surrounded. Georgie was wheeled away on a trolley. My legs gave way as I made space for the hospital staff.

I couldn’t believe I had got her all the way to Bristol, and we were going to lose her in the first 10 minutes of arriving.

The seizure passed, but then she stopped breathing. We watched as staff fought to save her, manually pumping air into her lungs. While their efforts worked, she was still at risk. Suddenly, we were signing consent forms to allow them to put Georgie on a ventilator.

The next time we saw Georgie; she was almost unrecognisable.

Arriving at Seahorse Paediatric Intensive Care Unit was a shock. We genuinely thought we had been through the worst of it. I sat by Georgie’s side day and night. Specialists came in and out of her hospital room. None of them would tell us what was wrong.

Despite being on life support, Georgie was fading as the hours went by. Doctors told us we might lose her. How could we let Georgie’s nine-year-old brother know that his sister might die?

Georgie’s organs were failing – her heart, her kidneys, her liver. Nothing was working. She needed an operation so that a dialysis machine could take over from her kidneys and another machine to replace the function of her heart and lungs. The surgery was a success. Georgie was stable.

Stable. I will never hear that word in the same way. Before ‘stable’ felt like a good thing. When in Georgie’s case, stable meant being kept alive by machines?

Watching Georgie lying in a hospital bed, connected to 15 tubes, hooked up to 11 different machines, was almost unreal. We were helpless.

The knot in my stomach was so tight I struggled to drink anything.

Georgie remained in intensive care for four weeks. While her condition would improve one day and worsen the next, one thing was constant – the love and care from staff. They were incredible. Every single person we met invested everything they had to help Georgie survive. They came in on their days off. They brought us tea. They brought us facts. They made no promises. They gave no false hope. Instead, they gave us calmness, professionalism, and an abundance of kindness.

Staff would play Georgie’s favourite songs over and over or sit by her bed to read her a story or massage her swollen limbs. They were amazing. Day in and day out. For four long weeks.

Things started to look up in our fourth week. Staff had taken Georgie off life support after her heart was showing signs of improvement. After removing the machine, her body began to pump blood once more. When she opened her eyes, I saw a glimpse of the old Georgie. She knew who we were.

This was a huge moment in our journey. Doctors had been worried about the level of brain damage Georgie could have suffered, but even after everything, here she was. From this point on, Georgie grew stronger and stronger.

Being told Georgie could go home was both daunting and wonderful all at the same time. Georgie was so incredibly excited and her brother relieved. While my husband and I were thrilled to have reached this point, leaving Bristol Children’s Hospital meant we had lost the security of having staff around us. Now, we were on our own.

A year on and Georgie has made incredible progress. She’s returned to school full time and is tackling every part of her learning with the same gusto as before. She’s even participating in PE lessons again!

Eventually, after weeks of investigations, the only diagnosis found was two strains of the common cold. Even though Georgie’s illness remains a mystery, our little girl’s future looks bright thanks to the dedication and expertise of Bristol Children’s Hospital.

I hope no one reading this ever has to depend on Bristol Children’s Hospital or its dedicated charity, The Grand Appeal. Sadly, there will always be someone that does. Take comfort in the fact, your little one is in the hands of healing angels who are gentle, kind, and compassionate.

From the free tea from the Paediatric Intensive Care Unit nurses to the medical staff and the amazing people in the LIAISE office – everyone is there to support you all the way.

‘Thank you’ will never seem enough, but we are so thankful and will forever support The Grand Appeal so that families like ours can be cared for by the phenomenal staff at Bristol Children’s Hospital.”

Join Fliss and show your support so that more children like Georgie can get the life-saving care they so desperately need.