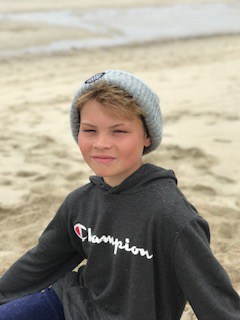 In 2019, one family walked 117 miles from coast to coast across Devon. Why? To help more sick children like their son George.

Since George was diagnosed with Crohn’s disease at 11 years old, he has lived in constant pain. Now 15, he lets nothing stop him from pursuing his passions.

We spoke to George’s mum Laura about how inflammatory bowel disease has impacted all of their lives.

“I still kick myself for not realising how ill George was. We had moved to Somerset, and George, along with his brothers, had started a new school. Life was hectic. Amongst the madness, George had gradually declined.

After our GP had requested a test, they confirmed George was a severe coeliac. George started on a strict diet, which felt like a full-time job on top of everything else. Especially, as there was no way my other children would give up eating wheat and gluten! Nevertheless, we persevered, hoping George would improve.

Our follow-up appointment with an allergy consultant came a couple of weeks later. We walked into the room. They took one look at George and rang Bristol Children’s Hospital to have him admitted.

It all happened so fast. One minute we were checking in to a routine appointment. The next we were in Bristol meeting with Dr Wiskin, a Consultant Paediatric Gastroenterologist, planning which procedures George needed to have. How had we gotten to this point?

Having to ring my mum and ask her to look after George’s brothers made it all feel real. I needed to focus on George.

At 11 years old, George was diagnosed with Crohn’s, a type of inflammatory bowel disease. Crohn’s was causing inflammation of his intestine and he’d lost a lot of weight.

Seeing George suffer was upsetting. Knowing the condition was lifelong made it even worse.

But six years later, and we couldn’t be happier with our care. We’ve built up a great relationship with the Gastroenterology Team. We will be sad to leave them when George moves over to adult services. They have always opted for treatment George is happy with and that he understands. I can’t fault them.

George still has his bad days, though. Thanks to his medication, his bowels are okay, but he is constantly exhausted. And I mean really exhausted. His body aches all over, and he suffers from ulcers around his mouth.

Despite everything that has been thrown at him, George never complains. He is very sporty and will choose sport no matter how long he takes to recover afterwards.

When George’s grandparents plotted their own sponsored walk from south to north Devon, all the family got involved, including George. We aimed to raise £2,500 to help the Gastroenterology Team by funding their membership to a special register for people with inflammatory bowel disease called the UK IBD Registry.

The nationwide project wants to improve the health of people living with inflammatory bowel disease like George by collecting and analysing data. We knew it would help improve George’s care and the treatment of so many other patients across the South West.

We also knew it wasn’t the most obvious bit of kit to raise money for. So, it was amazing to see my extended family and friends get behind something meaningful to us.

We collectively tackled the 117-mile trip across Devon in six-hour walks each day. While it was enjoyable, the wet conditions made it hard at times. Sponsorship really built up, and everyone was more generous than we could have imagined. So much so that we raised nearly £8,000!

Knowing this amount would have a direct impact on my child’s care was a wonderful feeling. It was great to see something good come of George’s health issues.

George has aspirations of doing a sport and health-related degree. No doubt he will have additional health issues himself, but it will mean he can empathise with others, and he’ll have a good awareness of his own body. I’m really proud to see George turn his condition into a positive.”

Kate works with our incredible family of fundraisers, supporting them throughout their journey. Contact Kate if you are interested in fundraising on your own or with friends and family or want to find out more about fundraising in memory of someone special.