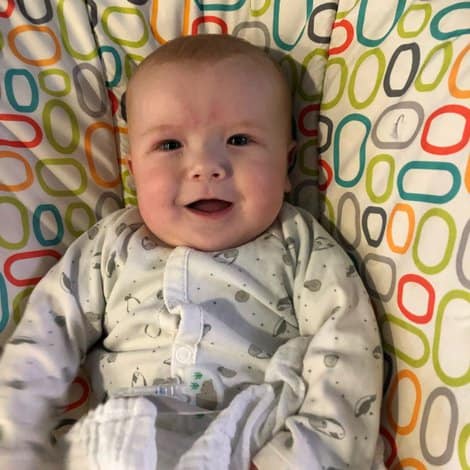 When Melissa gave birth to her son Finley in February, she and her partner Ben had no time to prepare themselves for the devastating news that Finley had a rare heart condition.

We asked Melissa how she’s coped with having a child in hospital during the pandemic.

“For any parent, wanting to know whether their new-born child is healthy is the first thing on their mind, and for a while, it seemed like our little Finley was.

We enjoyed the first six hours of his life, blissfully unaware of what was to come. It was only until I pressed a buzzer by my hospital bed to request some paracetamol that a nurse took one look at Finley and realised something was wrong. He had turned grey.

Finley was whisked away by staff to be assessed. My partner Ben and I had no idea what to think.

After what felt like a lifetime, doctors returned to tell us Finley had a suspected heart condition. He needed to be transferred to Bristol Children’s Hospital urgently.

There was even a chance Finley wouldn’t make it to Bristol, they said. My world shattered.

While they prepared Finley for his transfer, I glimpsed him wrapped up in an incubator. I realised this could be the last time I would see him alive.

Thankfully, he made it.

The team in Bristol discovered Finley had a heart condition, which meant that the two main blood vessels leaving his heart were in the wrong order. The left side of Finley’s heart was also missing coronary arteries which supply blood, oxygen, and nutrients to the heart.

Receiving his diagnosis was overwhelming – almost shocking. How had Ben and I ended up miles from our home in Swindon, in a hospital corridor, anxiously waiting to hear if our baby would be okay after such a smooth pregnancy?

Finley needed surgery to correct his heart defect. I couldn’t believe someone so small could undergo such a serious operation.

The cardiac team informed us that surgery had gone well, but because of other complications, Finley would need life support. Seeing Finley like that – covered in wires and tubes – was horrendous. I can’t even bear to think of it now.

Due to the poor condition of his heart, a transplant seemed like the only option for Finley but because of his age, was unlikely. He was deteriorating fast, and in April, he nearly died.

The pandemic only caused more stress. The hospital understandably introduced restrictions for visitors, meaning only one parent could stay with their child. With Ben at home looking after our other son, I was all on my own – lonely and too scared to leave Finley’s side, but desperate to see his brother.

Professor Caputo and the cardiac team suggested to Ben and I that they could try using stem cells to help Finley’s heart. The operation would be an experiment. No one had performed it in the UK. Despite the risks, Ben and I agreed to do it. We had to try, for Finley’s sake.

After the hospital’s director gave the go-ahead, we prepared ourselves for yet another operation. I held Finley’s hand tight and tried to think positively. I knew he was in the best hands.

Thanks to the expertise of Professor Caputo and his colleagues, Finley survived. I’ve never been so relieved.

The staff at Bristol Children’s Hospital are all heroes in my eyes. They were willing to try anything and everything to help Finley.

During our first few months in Bristol, I cried every day. It was hard to communicate with other people and tell them how I felt. I wasn’t ready to talk. Then I met the Family Support Practitioners, Katie and Bobby. They have been a lifeline and their genuine care for my family and I have been clear from day one. Whether it was about going home, treatment outcomes, or just about anything – Bobby and Katie were on hand to advise Ben and me.

Sometimes it’s the littlest gestures that can make such a difference. When I told Katie and Bobby about my other son’s birthday before lockdown, which we had missed while we were in hospital, they gave us tickets to Bristol Aquarium, funded by The Grand Appeal. Just when money was tight and life was feeling strange, we could get away from hospital for a few hours to spend time as a family.

Five months on and although the future for Finley is looking uncertain, he is doing amazingly well and has even been discharged from hospital! His strength is an example to us all. Finley still needs lots of medicines and a ventilator at night, but I’m prepared to do anything to have our family all together at last. While we are not sure how his heart will cope as he grows, we will keep smiling and hope that a heart transplant comes along.

Being in hospital has changed my life forever. I have seen and experienced more than any parent should have. As awful as our time at Bristol Children’s Hospital has been, I am happy with my time here. I’ve made friends for life with parents who have been through the worst. I have learned more about myself than I ever could at home. I’ve changed as a person and have become more positive. I won’t look back on this time and see it as horrific when in fact so much good has come from it.

Without Bristol Children’s Hospital, Finley would not be here. There is nothing I could ever do to thank them for saving his life.”