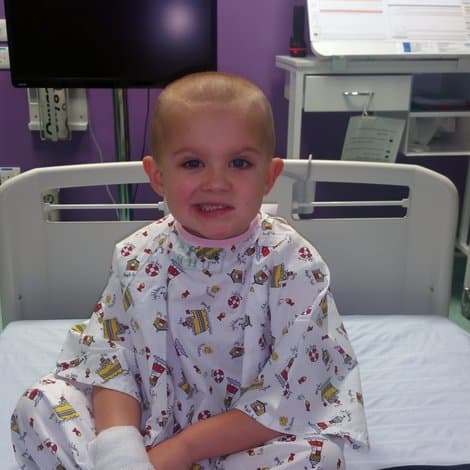 Brave Charlie’s epilepsy was so severe he was having several seizures a day.

Bristol Children’s Hospital is one of only nine children’s hospitals around the UK performing very complex operations on babies from as young as five weeks through to teenagers. Charlie is one of them.

In 2016, Charlie underwent major brain surgery performed by Consultant Neurosurgeon Mike Carter and his team, which turned Charlie’s life around.

We asked Charlie’s mum Carley about their experience at Bristol Children’s Hospital and why you should support children like Charlie.

“When they told us Charlie, or ‘Bear’ as we call him, had epilepsy, our hearts sank. We just wanted to wrap him up forever and take all the pain away. Yet, it was almost a relief to know we weren’t imagining it. Our gut instincts had been right all along.

Charlie was around two years old when we noticed something was wrong. Charlie would have vacant episodes where he would stare blankly, his eyes slowly glazing over while the side of his mouth drooped. It was a frightening sight. Despite being unresponsive, Charlie could somehow still walk around. We’d have to protect him from himself.

These episodes only got worse and worse.

Being out of breath or having a high temperature seemed to be two of Charlie’s biggest triggers. Imagine if every time you kicked a ball around or had fun at the soft play centre it ended with you convulsing on the floor.

Having a normal life was becoming increasingly difficult for Charlie.

It was a Saturday and our little Charlie Bear had tonsillitis. Where for some, tonsillitis would be an unpleasant nuisance, it had sent his seizures haywire. They were coming one after the other. We rushed to the Emergency Department at Bristol Children’s Hospital.

Upon seeing his condition, the staff booked us in for an electroencephalogram (EEG) test. An EEG tracks and records brain wave patterns. Once Charlie’s EEG had picked up his irregular brain activity, we were given the official diagnosis. I thought, ‘what happens now?’

Following months of medication, an MRI scan revealed Charlie had a mass on his brain. I looked at the consultant and asked, ‘does my son have cancer?’ She wasn’t sure, she said.

We were living every parent’s worst nightmare.

The hospital staff talked through our options with us. One of them being brain surgery. Could we put a now four-year-old through that?

A call from our hero, Mr Carter, gave us the reassurance we needed. Wanting to avoid potential future procedures, Mr Carter proposed he perform one operation to remove the problem area in his brain. He was confident he could do this safely. Our journey to epilepsy surgery had begun.

In November 2015, Charlie and I spent a week at Bristol Children’s Hospital. Charlie was taken off his medication, and a tube was inserted into his hand. With another EEG hooked up to his head and Big Brother-style cameras on the wall, staff monitored Charlie around the clock, waiting to see if his brain activity matched up with his physical seizures.

Being stuck in the same room for a week was hard on Charlie. The Play Department brought us a mini trampoline so Charlie could burn some energy in his room. They also made play dough together and visited us each day to play.

After a week of testing, Charlie’s case was submitted to the local and national board so they could decide if Charlie was a good candidate for surgery. The wait was agonising.

As Christmas came closer, I got the call to say his surgery could go ahead. It was booked for 4 January 2016.

Suddenly it all was very real and scary.

We went for our check-up with Mr Carter. He made us feel so at ease. Mr Carter told us Charlie had a 70% chance of being seizure free, but it was likely he would be on medication for life. We knew surgery was risky, but we had to take a chance. It was our last option.

I made a special request and asked Mr Carter if he would call me halfway through Charlie’s operation. Although it wasn’t something they usually did, Mr Carter said if it was what I needed they would, of course, do it.

The big day came and Charlie, myself, Charlie’s daddy Adam and his gran arrived at the hospital, not knowing what was to come.

As soon as Mr Carter came to see us, he went straight over to Charlie, shook his hand, and said ‘hello’. That moment will always stick with me. Mr Carter’s compassion and love were clear to see.

Adam and I took Charlie to theatre. I held him in my arms as he went to sleep. They spent around 45 minutes with Charlie before his surgery connecting him to various tubes and lines.

As he left, all I could do was cry. I spent the day watching the clock in a daze. It was horrendous.

After around five hours, I got the call I had been waiting for. They were taking their time but Charlie was okay, they said. It was comforting to know he was in the best hands.

Four hours later, Adam and I were taken to see Charlie. Our little boy was covered in bandages and wires. He even had a drain in his head. Absolutely nothing could prepare me for that sight. My heart was broken.

I couldn’t help but blame myself. Did I do something wrong when I was pregnant? Is this my fault? Of course, this had nothing to do with me, but as Charlie’s mum, I felt guilty. Why is this happening to Charlie and not to me?

Charlie had a few rough days and nights, yet by the Friday, our little warrior was given the okay to go home. He was still very sore and swollen but could finish his recovery with us.

Fast forward five years, and Charlie is seizure free and is no longer taking any medication. It literally is a dream come true. He may have some difficulties and need more supervision than children his age, but he has a seizure-free life, and that’s more than we ever hoped for.

Charlie is now the cheekiest boy with a passion for all things football and Liverpool FC. We have Bristol Children’s Hospital to thank for that. I’m not sure how I could ever repay them.

I urge anyone who is thinking about epilepsy surgery at Bristol Children’s Hospital to trust in the team. They are incredible. The outcome could be far greater than you ever imagine.

And for anyone thinking of how they can support a boy like Charlie, donate to The Grand Appeal.”