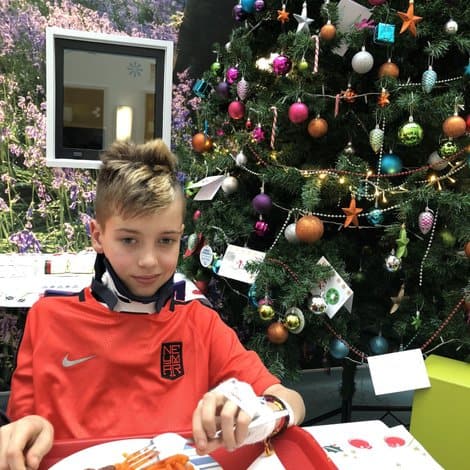 Imagine coming face to face with a car, driving on the wrong side of the road, as you drove your three young sons home.

Unfortunately, this terrifying experience happened to Claire in 2017, just days before Christmas. Brandon, her 12-year-old son, was badly hurt.

Claire and Brandon tell us about the horror crash and what it was like to spend Christmas Day in Bristol Children’s Hospital.

“Three days before Christmas 2017, I had picked up my three sons from their grandparents after preparing a bride for her wedding – I am a hairdresser. As we were driving home, we were involved in a head-on car collision, at speed. The other driver was on the wrong side of the road.

We were at the scene for almost three hours, while the emergency services tended to us. My son Callum (then aged 13) escaped with no physical injuries, Ashton (then seven) suffered from a nasty laceration to his forehead and needed to be taken to Swindon A&E and Brandon (then 12), suffered the most severe injuries, breaking his neck and back and injury to his abdomen. He needed to be taken to Bristol Children’s Hospital.

My husband arrived at the scene to go with Brandon to Bristol. The air ambulance was unable to land, as conditions in Bristol were too foggy, so they travelled by land with the air ambulance paramedics.

I was taken to Swindon, having suffered extensive seatbelt injuries to my shoulders, ribs, and pelvis. I was later taken to Bristol to be with Brandon. As I arrived, he was still in the Emergency Department and there was concern part of his bowel had ruptured. A scan later luckily showed his stomach pain was instead down to severe bruising. Because of his injuries, he needed to stay in hospital.

The team at Bristol Children’s Hospital could not have done more for us. As I was still in extreme pain, they cared for me too in Brandon’s room, wheeling me down the road to the BRI for morphine and x-rays as required. It sounds odd but with my injuries; it was easier to sleep in a chair in Brandon’s room than in an actual bed.

Christmas was around the corner, and all our plans had changed in a heartbeat. My youngest Ashton was only seven at the time, and the magic of Christmas was still so important to him. What blew me away was how much effort the hospital staff went to keep that magic alive during those difficult few days.

When we woke up on Christmas Day, Santa had been. Brandon’s bed was full of presents, not just for him but for his brothers, too. My husband, Ashton, and Callum came up, and we had Christmas together in the hospital and were served Christmas lunch before, later that day getting the incredible news we could go home.

This year, due to the pandemic we know Christmas will be different for the children that are too ill to go home or unexpectedly find themselves in hospital, as we did.

However, we also know that the hospital staff, with the support of The Grand Appeal, will do everything they can to keep the Christmas magic flowing through the hospital walls. So, if you can spare a penny or a pound, please donate and help them make this Christmas just as special for the patients, and their families in hospital this year.”

Because of restrictions currently in place at Bristol Children’s Hospital, only one parent at a time can visit their child. While understandable, regulations mean families and siblings will have to spend their Christmas separated.

Back in 2017, Brandon was lucky enough to be surrounded by his family and even enjoyed Christmas dinner.

“On 22 December 2017, the day after my 12th Birthday I was in a head-on car accident with my mum and my two brothers, Callum and Ashton. A lady drove into our car when she was on the wrong side of the road. We had an 80mph impact, we were all injured.

I got out of the car, and I was sick, I felt shocked and in pain, the rest was a bit of a blur. The Wiltshire Air Ambulance arrived to see me, however, it was too foggy to land in Bristol so the paramedics came in an ambulance with me.

I got to Bristol Children’s Hospital and was really poorly. I had broken my neck and back and had really bad stomach pains. The medical staff thought I could have ruptured my bowel, so we were really concerned. I was put in a neck brace. It was quite uncomfortable, but I understood why I had to wear it.

My mum, who was also injured, was able to come to hospital and sleep in the chair next to me. The staff even took her to the hospital next door to get her medication in a wheelchair, as she could hardly walk.

I had lots of visitors, family and even a friend from school. It was so nice to see so many people.

I was still in hospital on Christmas Day. I woke up and Santa had been; he has even delivered presents for my two brothers. I had some amazing gifts, including some games and books.

My dad and my brothers arrived to see me and mum. The hospital even did us a Christmas dinner in a separate room to my bed. It really was so good, and I had to eat to get my strength up.

I am a keen footballer and played three times a week. I was devastated that my injuries meant that I would not be able to play for a long time. After nine months, I finally got to kick a ball again. I am now playing at a higher level through my determination and passion for football. I now play for Swindon Town Elite Development Centre and Wroughton Youth FC.

I still get pains in my back, but nothing will stop me from playing and doing what I love.

I have raised some money for The Grand Appeal, the dedicated charity for Bristol Children’s Hospital, and Swindon Town FC community Foundation as a thank you to two charities that got me through the difficult times.

To anyone who is in hospital at Christmas, even though this year is different, you will still have a fabulous day. The staff make it so special, and you don’t feel like you miss out.

To the staff who treated me, cleaned my room, and looked after my mum. Thank you so, so much, I can’t thank you enough.”

Help us save more lives