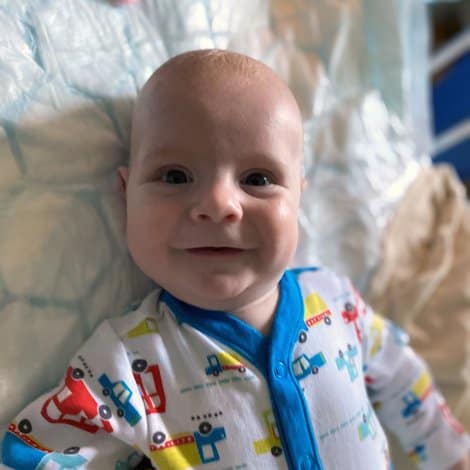 Since 2017, we have funded vCreate a secure video messaging service for families at the Neonatal Intensive Care Unit (NICU).

It means that parents will never miss out on those special moments, even if they have to return home. Parents like Helen. Here, she tells us about her NICU journey so far.

“All the hopes we had for our pregnancy vanished pretty quickly. At our 20-week scan, Gerry and I were told that our little one was diagnosed with CDH – Congenital Diaphragmatic Hernia – a condition that meant his diaphragm wasn’t forming properly. Worst yet, there was a chance he wouldn’t survive.

I felt crushed and weighed down by worry. Would Bertie make it? And even if he did, what would life be like for him? Questions raced around my mind endlessly. The only reassurance we had came from the team at St Michael’s Hospital in Bristol. We had been referred there because Bertie would need specialist treatment. When I went into labour, I knew it would be the safest place for him.

Looking back at his birth is a blur. The minute he was out, they immediately sedated him, well almost immediately. He managed to let out a tiny cry. As soon as we heard it, we thought, ‘come on, Bertie, you can do this!’ For a few precious seconds, I stroked his back before he was rushed away to the Neonatal Intensive Care Unit. I’ve never been so overjoyed, yet terrified, in all my life.

It was unbearable not being able to hold him. After seeing him for the first time, all I wanted to do was have him in my arms. Eleven days in, the nurses finally handed him to me. It was the most amazing feeling and a moment I will never forget.

Unfortunately, Bertie still has a long road ahead of him. His condition meant that some of his organs shifted upwards, affecting the development of his lungs. He is five months old now, and we’ve seen him undergo so many procedures and surgeries. It’s heartbreaking. We’re so thankful that he can now breathe on his own, but he still has big complications with his stomach and his bowels.

Nothing is straightforward with Bertie. Right now it just feels like endless discussions about what could happen because no one really knows. And that’s the worst part.

If we had a clearer path ahead of us – something more tangible – I could deal with it all a lot better but unfortunately, his condition just doesn’t allow that. I wish I could think to myself ‘Bertie just needs this to get better, and then we can go home.’ But home feels like a distant dream. Especially, because he still hasn’t fed properly. His tummy can’t tolerate it.

Being in a state of the unknown makes going home even harder. I wish I could stay by Bertie’s side all day and all night, but sometimes it’s just not possible. We live over 40 minutes away in Weston-Super-Mare, but thankfully Cots for Tots has funded something called vCreate. It’s a secure video messaging service, which allows staff to send us updates. It makes us feel like Bertie’s been left with friends or family rather than hospital staff. They’ll send us a video or a message saying ‘look, Bertie’s smiling’ or ‘look, here he is laughing’.

There’s something very powerful about seeing a photo or video of him. Rather than receiving a call, I can see with my own two eyes that he’s doing ok. And it feels wonderful to share the happy moments with staff. I think without vCreate I’d be worrying myself sick all the time.

Staying at Cots for Tots House has been a lifeline too. After I was initially discharged and with nowhere to go, Gerry and I had to return home. I can’t imagine what life would be like if we had to keep making that journey every day. I am by Bertie’s side each day – it’s where I need to be to stay sane. Thankfully, having a comfy room at Cots for Tots House lets me do that.

Despite the uncertainty, knowing we have the NICU team behind us makes me feel hopeful. Bertie is the happiest little guy, and I know he can do it. Being here day in and day out, I feel surrounded by family. I can chat with anyone if I’m feeling worried or upset and that makes a world of difference.

I always knew I was going to be in Bristol for a long time and that at some point Gerry would have to return to work, so it would just be me, all by myself. But because the nurses make such an effort and despite sitting by Bertie’s side feeling angry, sad, and a world of other emotions, I’ve never ever felt alone. It’s a testament to everyone that works here. Bertie and I certainly wouldn’t want to be anywhere else.”