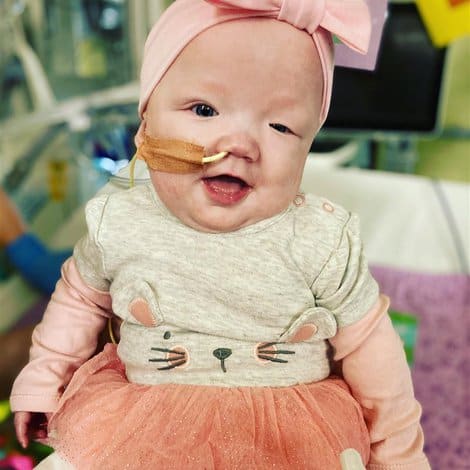 Last year, five-month-old Bella was left fighting for her life after becoming ill with a seemingly common cough.

Here, her mum Laura remembers that harrowing time and explains why fundraising for Bristol Children’s Hospital is so important to her.

“When Bella, my five-month-old daughter, developed a cough, I could never have predicted the nightmare we would find ourselves in.

Bella’s cough was deep. It almost sounded like a bark! Doctors reassured us they thought it was a condition called Laryngomalacia, which commonly causes infants to breathe noisily because their voice box is soft and floppy. Bella would grow out of it, they said.

Weeks later, Bella had deteriorated. After some scans, our local hospital in Gloucester sent us to Bristol Children’s Hospital. The oxygen levels in her blood were dropping dangerously low.

Three days into our visit to Bristol Children’s Hospital, Bella was taken for a routine procedure to check her voice box. As we anxiously followed Bella to theatre around 15 doctors and nurses sprinted towards her. Our baby girl had gone blue.

Bella wasn’t breathing. I froze, rooted to the spot as hospital staff clambered over her.

Two hours passed before a surgeon greeted us with the news Bella’s condition was not in fact Laryngomalacia. Instead, her airways were being crushed by what they thought could have been a tumour or a heart defect. Bella would need an MRI scan for them, to be sure.

By now, Bella could not breathe for herself and needed intensive care. I was devastated.

Seeing Bella ventilated is a sight I’ll never forget. I couldn’t even hold her. For five long weeks, my partner Luke and I waited, watched and listened for any sign that our gorgeous little girl was recovering.

When Bella finally woke up and cried out, I was met with silence. The tube down her throat had taken her voice. I could only see the pain and fear in her eyes.

Doctors confirmed Bella didn’t have a tumour, but a complex heart condition that was causing pressure on her airways. Different teams from across the children’s hospital and even Great Ormond Street met to discuss Bella’s treatment.

Eventually, Bella could breathe with the help of a full-face mask. I was amazed. Bella was coping brilliantly until she suffered another respiratory arrest. We were back to square one.

Only days later, Luke and I watched on as a hospital porter whisked Bella to theatre for open-heart surgery. Seven hours went by. Luke and I clung to the hope that Bella was in the best hands.

Bella seems to have gone from strength to strength since her surgery last December, but only time will tell if it has been a complete success. Doctors hope that as Bella grows, her airways will open more.

We survived 81 days as Luke and I watched in horror as our precious girl fought to survive. It will forever be the scariest and most challenging days of our lives. Throughout the darkness, there was one small thing that made a huge difference: The Grand Appeal.

Being just a stone’s throw away from Bristol Children’s Hospital gave us comfort in our lowest moments and for that, we’ll be forever grateful to The Grand Appeal.

Wanting to turn our ordeal into something positive, I challenged myself to push Bella 50 miles in her pram to raise money. It became a great way for me and Bella to get outside and enjoy some time together, especially during the pandemic.

Seeing family, friends and even strangers donate to my cause meant the world to me. Best of all, I know I’m helping other families who find themselves in a situation like ours.”

Help other children like Bella get the urgent care they need