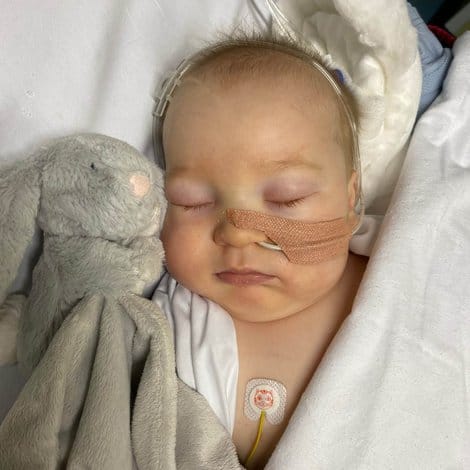 Every day over the festive period, at least two children will find themselves in need of life-saving care from the Paediatric Intensive Care Unit.

Last year, Beau was one of them, after a common cold left him fighting for his life. Here, his mum Sarah remembers that harrowing time and tells you how a donation from you this Christmas will help provide extraordinary care for children like Beau.

“It was the week before Christmas, and Beau, my five-month-old son, had been suffering from the typical cold and cough that seems to hit all babies over the winter months.

However, on Saturday 15 December, he suddenly got a lot worse and started to have retractions. His chest was sinking in with each breath. I recognised the symptoms from something I had seen shared on social media and knew he was struggling to breathe, so we took him to our local accident and emergency department (A&E) in Torbay.

Beau was monitored for several hours, and eventually we were sent home. That night, we could not sleep – I just knew his breathing was not right. So, I followed my instinct and took him back to A&E. He was monitored through the night and then transferred to the children’s ward early on Sunday morning – he was diagnosed with bronchiolitis.

From there, things quickly escalated. Within 5 minutes of arriving on the ward, he needed oxygen through his nose to help him breathe and as the day progressed, his condition continued to get worse, so he was put on a CPAP mask to help keep his airways open.

That afternoon, Beau stopped breathing momentarily. I cannot explain what that feels like and how powerless and vulnerable you feel. They intubated him on the high dependency ward before moving him to intensive care (ICU). There was no paediatric ICU, so my little baby was there, lying across an adult bed, on a unit with no other children. Everything was so clinical, the doctors so serious – at that moment, I had no reassurance my little boy would pull through.

At midnight, he was transferred to Bristol Children’s Hospital by the WATCh team, a specialist transport team for critically ill babies and children. His Dad, Patrick, went in the ambulance with him and I followed by car.

It was now 3 am on Monday 17 December. I remember walking into PICU so vividly all the lights were off, but this Christmas tree lit up the middle of the ward. I cannot begin to explain the difference between PICU and the adult ICU we had come from; that single Christmas tree represented so much to me that night.

Beau and Patrick were already there, Beau was in a cot surrounded by other little babies fighting their own battles. Despite what was happening around us, there was a sense of calm. A lovely nurse approached me, gave me a cuddle, and said, ‘We’ve got him, he’ll be okay.’

That was the first time, someone had really reassured me. I had made the journey to Bristol that night, not even sure if my son what would happen when I arrived. I cannot express just how much that moment meant – we immediately felt comfortable and like we had arrived home.

We were offered a room in the hospital and shown to a bunk bed upstairs; we slept for four hours for the first time in three days, before returning to Beau’s side.

The next day, our first full day at Bristol Children’s Hospital, we were told about The Grand Appeal and offered a room in Paul’s House. We could not believe it – how was this even possible. Having, our own space in a comfortable room felt like such a luxury. As any parent will know, it is so hard to sleep when your children are sick, but that night, I do not think I have ever slept better. I was right across the road if Beau needed me and, I knew he was in the best possible hands.

Beau continued to be intubated and tube fed for a few days, then slowly his tube was taken out and eventually I could bathe him on the ward and breastfeed him again. Before we could be discharged, he spent a night on Caterpillar Ward, where they continued to monitor his progress. When we arrived the next day, he had already had a visitor – Father Christmas. He was sitting there in a bouncer with a present in his hand and his WATCh bear by his side, that had been given to him that terrible night, only days earlier.

Just in time for Christmas, Beau was discharged, and we could go home. Christmas was quiet that year but quite a milestone for Beau – he has his first ever taste of food on Christmas Day – a bite of a carrot before falling asleep.

While Beau has had four subsequent bouts of bronchiolitis since last Christmas and several hospital stays, we now know the signs to look out for and as he gets older, he is much stronger and able to fight it better.

The care, compassion and comfort we received from the staff at Bristol Children’s Hospital and The Grand Appeal over that frightful week was something I will never forget. There is nothing worse than when your child is sick, but despite that, they help you feel at ease.

Having a room in Paul’s House gave us so much more than a bed at night. Everyone in that house is in it together – you are all instant friends, you all immediately have a common understanding that unites you. It is a support network and one that you need so much during those difficult times.

Thanks to Bristol Children’s Hospital, we are spending this Christmas at home together. Our thoughts will be with all the sick babies and children who are fighting for their lives at what should be the most magical time of year. So please, if you can, make a donation – from helping adorn a Christmas tree, like the one I was greeted with, to funding life-saving equipment – the smallest gesture can make the grandest difference.”

Help us save more lives