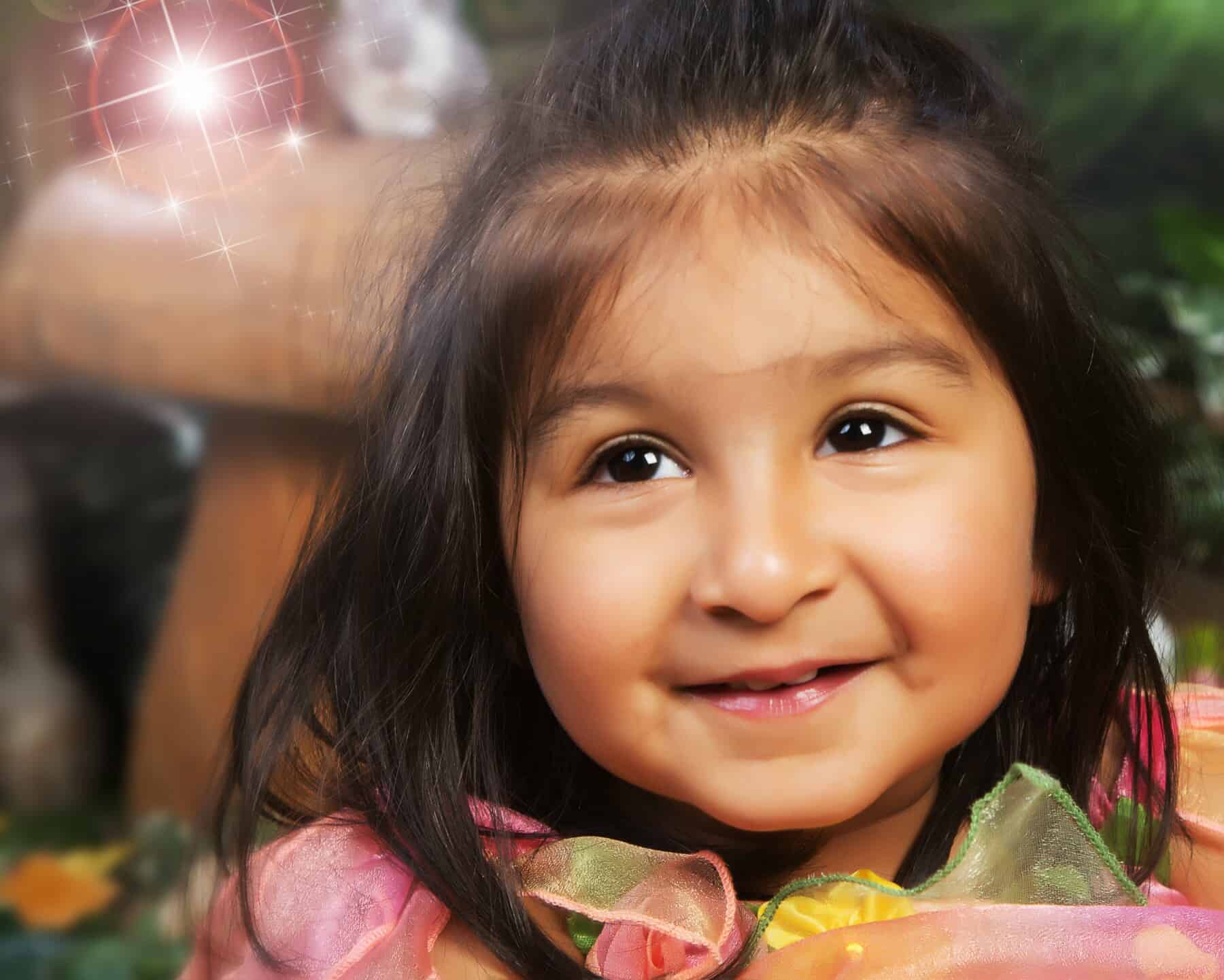 While restrictions are being eased, many of the families in our care continue to shield or socially distance. Four-year-old Amber still has limited contact with people because her heart condition puts her at risk.

We spoke with Amber’s mum Sangeetha to hear about their hospital journey and the challenges they have faced.

“When we first heard about coronavirus, it didn’t worry me, but as the crisis deepened, we pulled our four-year-old daughter Amber out of nursery. It felt safer having her at home. Seeing the country edge towards lockdown and people scramble for supplies filled me with fear. What if we ran out of Amber’s medication or the pureed food she depends on?

Even as restrictions lift, we are still cautious. Her heart condition leaves her vulnerable and I’m not prepared to leave anything to chance, especially after everything we have been through.

During Amber’s birth, we were thrown into our first trauma. Amber and I both developed sepsis, and she was left fighting for her life. After recovering in the Neonatal Intensive Care Unit, we thought that would be the end of our bad luck. Little did we know that life was about to change drastically for us.

Baby Amber never settled well. She would constantly cry and found feeding hard. Despite several appointments, nothing was ever diagnosed. Four months on, and Amber was still inconsolable. She’d spend 18 hours of the day crying. Rocking her gently or watching Toy Story seemed to be the only things that settled her. During one weekend, Amber became very ill. We took her to the Emergency Department at Bristol Children’s Hospital and were sent home with antibiotics for a suspected chest infection.

However, 24 hours later, something didn’t seem right. We returned to the Emergency Department with Amber. They did a chest x-ray, and we anxiously waited for the results. Nothing in this world could have prepared us for what happened next.

They asked me to go into a resuscitation room where I could see several doctors and nurses crowded around. My heart sank. They told me to sit down as they delivered the news that Amber was extremely poorly. Her heart had become swollen. Immediately, the cardiac team was called and from that moment, everything moved at lightning speed. Staff tried to explain the diagnosis, but all I could concentrate on was the risk to Amber. I felt sick. I gave Amber a kiss goodbye, fearing it would be the last time I saw her alive.

Relatives rushed to our side as they took Amber to the Paediatric Intensive Care Unit (PICU). When I first saw Amber in intensive care, I gasped. She had so many lines attached to her. We spent the night sleeping in a room next to the PICU. My body shook with disbelief throughout the night, refusing to be still. I couldn’t believe the nightmare I was living.

The next day, two heroes walked in – Professor Robert Tulloh and surgeon Professor Massimo Caputo. They told us Amber had a condition called ‘ALCAPA’, a rare heart defect. She needed specialist surgery urgently. Without it, she would not survive. We prepared for the worst. We called a priest and played her favourite song from Toy Story. Family members visited, two by two, to offer their support and love. I felt broken, but I knew I needed to be strong.

Amber’s open-heart surgery took an agonising six hours. Question after question raced through my mind. Would she be okay? What would her scar look like? Why was it taking so long?

A crucial 48 hours passed after Amber’s surgery and she was still with us. But she hadn’t made it out of the woods just yet. Amber struggled to breathe by herself. Her left lung had collapsed. She needed intense physio and a CPAP mask, which she hated. She would scream and cry every time the mask came near her.

As the days turned into weeks and the weeks turned into months, we became more familiar with Bristol Children’s Hospital. I like to think of PICU as one of the happiest yet saddest places you can be. Each morning, I could feel the dread mounting as I made my way up the stairs to Level Four. What will happen today?

But every so often, the doom and gloom would disappear. The staff always knew how to make you smile. A nurse called Molly once dressed Amber up and brushed her hair. She looked beautiful. Seeing her in clothes, rather than a nappy, made my heart melt.

Ultimately, I couldn’t give up. Despite being at my lowest – feeling like I had nothing left – my love for Amber kept me going.

Over four long months, Bristol Children’s Hospital had become our second home. Amber grew stronger, and eventually, they allowed us to take her home. While we were overjoyed to have our baby girl back with us, it took some time getting used to being Amber’s carer and her parent. Amber needed medication 27 times a day, injections and countless other tests and treatments. It was a lot to take in.

Despite our challenges, with love and determination, Amber is now thriving. She still may need medication, but she shines brighter and brighter as each day passes. This is all thanks to the incredible and talented team at Bristol Children’s Hospital.

There is never a day that goes by that I don’t remember our journey or the people that have helped us get this far. Amber’s condition took us all by surprise and it has been the most traumatic experience we have battled, but I look back and think how lucky we are. We had only recently moved back to Bristol during my pregnancy, and it was the best decision I could have made. The Cardiac Team at Bristol Children’s Hospital is outstanding and if we’d lived further away, I could be telling a very different story. Call it mother’s intuition, but our move to Bristol saved my daughter’s life.”

If you want to support children like Amber, helping them to not only survive but thrive, donate today.