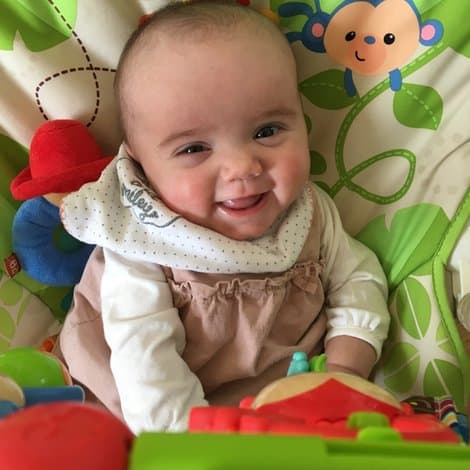 Isabella is three years old and has been cared for by the wonderful renal team on Lighthouse Ward since she was born.

“After being born prematurely at just 35 weeks, Isabella spent her first few weeks at St Michael’s Neonatal Intensive Care Unit. During which, we were fortunate enough to stay at Cots for Tots House despite being local. When she was three days old, we were told the devastating news that Isabella’s kidneys had not developed properly in the womb, and she was diagnosed with End-Stage Renal Failure. She needed to start dialysis as soon as possible if she was to have any chance of survival. Three weeks later she was transferred to Lighthouse Ward at Bristol Children’s Hospital, where she has been expertly cared for ever since.

After 12 weeks and three days in hospital, we could finally take her home. As parents, we took on whole new roles: we were trained to run her overnight dialysis machine at home, take her blood pressure, monitor weight and look out for signs of infection. We also learned how to pass Nasogastric tubes for feeding and give injections. Children with renal failure are poor eaters and the majority need to have a gastrostomy fitted at some point -Isabella received hers at six months of age after failure to thrive because of excessive vomiting –a common and debilitating side effect of renal disease. Isabella was stable at home on peritoneal dialysis for 14 months, and we even got to travel to Liverpool for six days with the machine and supplies delivered to where we were staying.

Sadly, Isabella became very sick in May 2017 because of a rare complication from her feeding tube and ended up in intensive care. After six weeks in hospital, our lives were turned upside down. Isabella ended up on Haemodialysis on the ward three days a week for three hours at a time. The haemodialysis unit treats children from all over the South West and many patients have to travel from over four hours away several times per week.

Inevitably Isabella’s development has been delayed spending so much time in hospital confined to a cot. She only started to pull herself up to stand at two-and-a-half years old and moves around shuffling on her bottom. Effectively she has rickets and her legs are bowed and her wrists bendy. Growth is one of the biggest challenges for the renal team as what happens in your early years determines how tall you might be in the future and how strong your bones will be. Isabella received daily growth hormone injections for six months.

After 18 operations, one of which was 10 hours long and involved three senior surgeons, Isabella was finally activated on the transplant list at two years, nine months, and four days old. She had spent over 200 days as an inpatient and over 200 days as an outpatient attached to a dialysis machine.

On 10 January, we received a call that changed Isabella’s life. We were told incredibly that a kidney match was available to Isabella. Having been told to expect at least a year-long wait, this news was just amazing.

After a seven-hour operation Isabella received her gift of life and to date has now gone dialysis-free for nine weeks. Soon we hope her central line will be removed, and we will be able to bathe her for the very first time. Three years is a long time to wait for your first bubble bath! Even more exciting; Isabella has taken her first steps – only made possible now that she doesn’t feel so unwell. She will have to be on immunosuppressant drugs for the rest of her life, and we are still very regular visitors to the hospital for blood tests and monitoring, but we hope this kidney will last her until adulthood.

What many people don’t realise is that kidney disease is very much a hidden disease. From the outside renal children do not look obviously sick albeit paler due to anaemia, and they are small for their age. But the majority are severely delayed walking, have oral aversion, and feel tired and sick most of the time. Dialysis only keeps their blood chemistry and fluid balance safe. It is not a replacement for a working kidney, and it has many associated risks, including sepsis.”