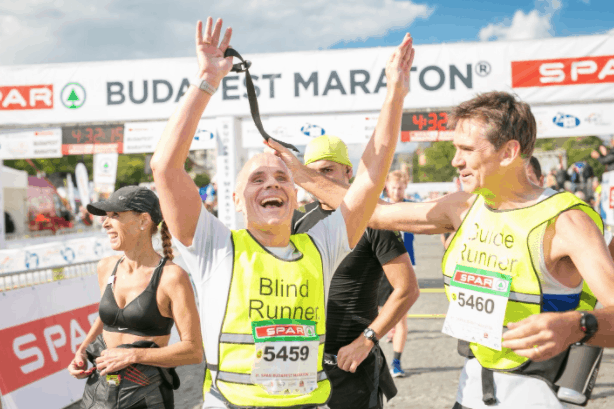 In need of a positive story about the strength of the human spirit in overcoming obstacles? Well, look no further.

This week’s story comes courtesy of Colin Johnson, the founder of VI (Visually Impaired) Runners Bristol. It is so easy to take walking and running for granted.

This fun and informal running group support visually impaired and blind runners to overcome obstacles and reach their running goals. Some of VI’s members have even gone on to completing marathons. Colin stresses how much running has impacted all aspects of his member’s lives.

We will be sharing some of their member’s inspirational stories over the next few months, so keep a lookout, but for now, we’ve asked Colin to give us a little insight into visually impaired running and an introduction to the group here.

“Running is something we can often take for granted, along with the obvious physical and mental benefits that it can provide. But what if you are blind or visually impaired- how can you even consider doing what we think is such a simple activity?

“With almost 2 million people living with sight loss in the UK, and around 360,000 of them registered blind or partially sighted, there is potentially a large section of society missing out.

“This is where, as a Bristol runner myself, I decided to start a running group for blind and visually impaired people. While in 2018, I became a guide runner and persuaded a bunch of my running friends to also receive guide training by England Atheltics.

“Since then, VI Runners Bristol Facebook group has grown to over 360 members including guides as well as visually impaired and blind runners.

“Many of the VI runners have gone on to complete parkruns, 10K’s, half and full marathons. This has not only improved their fitness but has also hugely boosted their sense of self-belief and confidence to take on other challenges.

“To be a guide, I often use a tether and provide instructions to my partner to avoid obstructions and any changes to the surface underfoot. In short, I act as my runner’s eyes. Becoming a guide is simple, and if you are visually impaired or blind, no running experience is needed because you can start with walking and build up.

“Pre-pandemic our group meets every Wednesday evening, and we usually start from a pub! Both runners and guides will post on the Facebook group, and requests for guides are filled by whoever is available for that session.

“The group is now in its fourth year and is always looking for new blind and visually impaired people that would like to come along and give running a go, as well as welcoming new potential guides to help out. We have also managed to get Bristol Mayor Marvin Rees to become a guide, and he has acted as a guide at the last two Bristol 10K events!

“The ethos has always been that we are a bunch of mates that love to get together and go running, and it just so happens that some can see better than others, but we all have a great laugh and have fun running together.

“If you know of anyone who would like to join VI Runners Bristol, please do come along or drop Colin an email.”

Including inspirational stories, tips and Q&A’s with running experts, the group is for people of every running ability.