Children With Cancer, Garfield Weston and our Intraoperative MRI Scanner 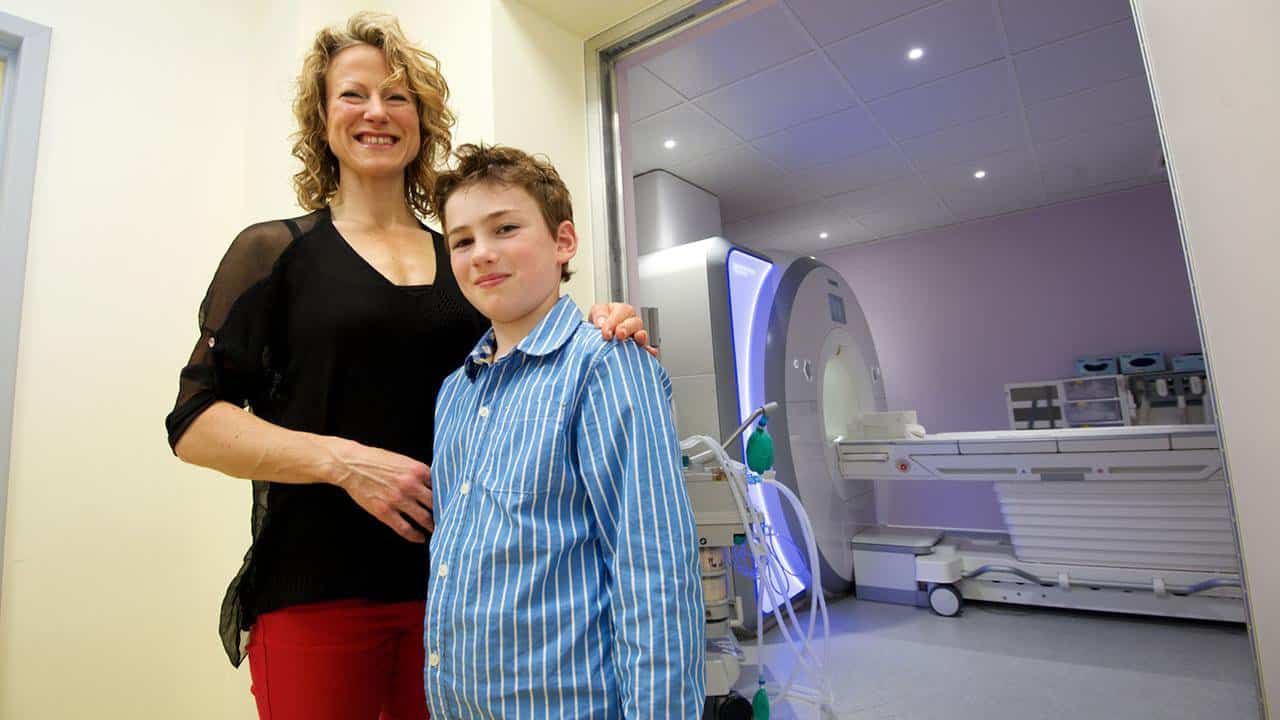 The Grand Appeal was able to fund a pioneering 3T MRI scanner and intraoperative scanning suite at Bristol Children’s Hospital, thanks to major donations of £500,000 from Children With Cancer and £50,000 from Garfield Weston Foundation.

Bristol Children’s Hospital is now one of only two hospitals in the UK and only a handful in Europe to have this dedicated technology for paediatric neurosurgery patients, placing it among the very best in the world for patients requiring surgery on the head, brain and spine.

The scanner’s precise image-guidance technology allows surgeons to operate on complex tumours in the very deepest parts of the brain. Ahead of surgery, the scanner can analyse the awake brain to identify the location of vital functions such as speech and movement, helping surgeons to avoid them during operation. Surgeons can also conduct further scans during a procedure to track their progress. This means patients only need undergo one anaesthetic, for one procedure, reducing the medical risk and emotional distress for the child.

The very first patient to be treated using the scanner was Jack Mooney, from Kingsteignton in Devon, who was just eight years old when he underwent surgery at Bristol Children’s Hospital. Jack had suffered from two types of epilepsy causing daily seizures since the age of five, and leading specialists diagnosed a large, low grade tumour known as a Dysembryonic Neuroepithelial Tumour (DNET) deep in his brain. Despite Jack taking three types of epilepsy medications at the maximum dose, his seizures remained uncontrolled, leaving surgery the only option. The operation and the tumour’s location threatened Jack’s speech, movement and sense of smell.

Jack went into surgery and the tumour was completely removed in one 13 and a half hour procedure. Had it not been for the scanner, Jack would have had to undergo further operations to fully remove the tumour, possibly causing irreversible damage to areas of his brain.

He was discharged from hospital four days later, and is now a happy, healthy nine-year-old.

Mike Carter, consultant neurosurgeon at Bristol Children’s Hospital, said, “This ground-breaking new piece of equipment gives us the capability to conduct complex procedures that two years ago would have been inconceivable. We would never have been able to bring this technology to the Hospital without the support of The Grand Appeal.

“We can now carry out scans in the operating theatre, in real time, providing precise information during the operation itself. This enables the complete removal of tumours and reduces the need for additional surgeries, which can be very stressful for the child and their family. Without the availability of the scanner, it is likely that Jack would have had to have as many as three more operations; instead, he was able to go home just days later.

“We are immensely proud to be the only hospital in the South of England to have such powerful, dedicated paediatric technology.”

Jack’s mother, Rachael Mooney, says: “The seizures were very frightening for Jack and disrupted his social life and education for many years, so to see him able to live a full and happy childhood is just incredible. The surgery has absolutely transformed Jack’s life, and we are all very thankful to everyone who supported The Grand Appeal and Gromit Unleashed. Without their kind donations our lives would still be on hold, but now we can move forward.”

Thank you so much to Children With Cancer and Garfield Weston Foundation for their kind donations, helping us invest in life-saving technology to care for children like Jack.